Directions To Our Farm - Google Map

After a few unlucky customers reported getting lost after being misdirected by Google Maps, I recently contacted the site and was able to make some corrections. You can now find an excellent (and correct!) map and driving directions to our farm HERE

Our sincere apologies to everyone who was affected by the error.
Posted by Carley McCutcheon at 8:38 PM 0 comments

How Maple Sugar Is Made

Maple Sugar Candy is made by first concentrating Maple Syrup further by boiling. This hot Maple Syrup concentrate is stirred until very fine sugar crystals form. Temperature and timing are crucial - while still fluid, it is poured into maple leaf shaped molds where it quickly sets and becomes solid. 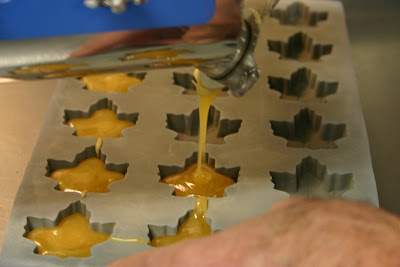 Maple Sugar is a totally natural candy, made entirely from the sap of the Sugar Maple tree. 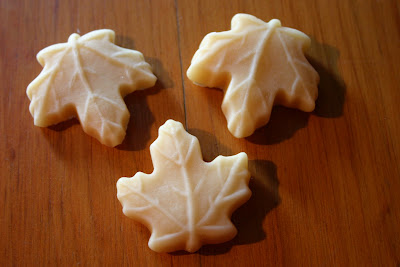 Posted by Carley McCutcheon at 8:15 AM 0 comments

I spoke to Dad last night, and he told me he'd been looking at our records over the years - turns out, this year wins the prize for the most days collecting and boiling sap in a row! We have had some sap every day for the past 24 days! With a record like that, one would think that we'd be having a great season over all, however, the yield has been very low each day, and is adding up slowly. Maple farmers all over the region and in the United States and Quebec are reported low yields as well.

Usually throughout the season, there are days when it either remains frozen and the sap stops running, or it remains too warm overnight and that stops the flow. Today may be the first potential day that Dad gets a rest, with the weather report predicting that it will not climb above freezing today. However, with that clear sky and strong sun I wouldn't be surprised if it got a bit warmer than expected...

Either way, it does appear that the end of the season is growing near. The long range forecast shows a spike in warm weather for Easter Weekend, which might just be enough to bring the buds out on the trees. In the meantime, we continue to take each day as it comes and hope to have a few more sap days before it is all over. We remain open to customers at the farm from 1pm- 5pm daily.
Posted by Carley McCutcheon at 7:52 AM 0 comments

The Sugar Master At Work 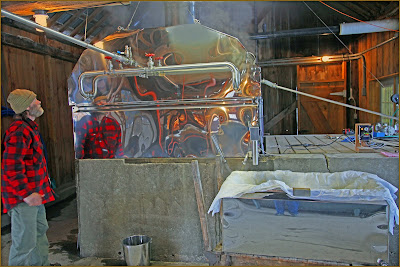 Dad was so tempted by the sound of the dish that he baked up a batch for us, and it really was delicious! We had it warm with some vanilla icecream...

The recipe that he used is as follows:


PREPARATION:
Mix together flour, sugar, baking powder, and nutmeg in a large bowl.

In a separate bowl, whisk together milk, butter, and lemon rind. Pour over dry ingredients. Sprinkle with raisins and stir until just combined. Spread in greased 8" square glass baking dish

Whisk together water, maple syrup, butter, and cornstarch in a small bowl. Pour over batter.

Mild Weather Rains On Our Parade

The sap run has slowed down over the past few days with this mild weather. It hasn't been quite cold enough to freeze overnight since Wednesday. We expect it is going to continue to be mild and rainy over the weekend, so we probably will have only a very small sap run, if any. Visitors are still welcome at the farm from 1pm - 5pm if you'd like to come out and stock up on that precious first-run syrup. Looking ahead, the weather forecast promises better weather to come by the middle of next week. Fingers crossed!
Posted by Carley McCutcheon at 7:44 AM 0 comments

Thanks so much to everyone who came out to visit our sugarbush this weekend! It was great to kick off the new season with so many smiling faces, and great sunny days. For those of you who are still planning to come out, we are now open daily from 1:00pm - 5:00pm.

We have had a slow but steady start this year and have collected small amounts of sap every day since March 2nd. The syrup we have made so far is delicious, and looks beautiful - Dad says it "sparkles". The weather forecast looks sappy for the next few days, with things warming up and getting rainy by the end of the week. However, the weather reports tend to change frequently at this time of year, so we will have to wait and see what mother nature brings our way. Stay tuned...
Posted by Carley McCutcheon at 5:53 PM 0 comments

The 2010 season is off to a good, early start as expected - we had our first official boil last night. As a result, we have some delicious, light, first-run syrup made, and we're working away at getting it bottled up so that it'll be ready for sale on Saturday afternoon. We will be opening at 1:00pm on Saturday and will close at 5:00pm, and we will also be open on Sunday from 1:00pm - 5:00pm. It's shaping up to be a beautiful weekend, so please be sure to make the most of it and come out for a visit! Chances are good that the sap will be running, and we will definitely be making everyone's favourite sugar-on-snow while we've still got some snow around to do it. Bring your sunglasses, and your appetite for the first syrup of the season!
Posted by Carley McCutcheon at 7:15 PM 0 comments