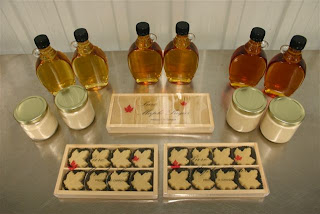 We were very lucky to have another successful year at the Royal Agricultural Winter Fair, placing first in four out of seven categories! As such, we were awarded with the Corbett Trophy for the highest points in the maple sugar categories, and we also won the Premier Exhibitor Trophy for the highest points total overall. A true honour!
Posted by Carley McCutcheon at 8:47 PM

That's great news. Your syrup is the best I've ever tasted. Can't wait for spring to get some sap fresh from the trees to drink too!
Michael Borne

congratulations on your accomplishments. You must have a great product.

I have a maple syrup blog as well,

saptosyrup.com, it is great to see someone else with this great passion.