Looking out the window today paints an entirely different scene than it did this week. A good amount of fresh snow, cooler temperatures, and high winds are reminding us, as least temporarily, what winter feels like. It was too cold yesterday, and we expect it to remain too cold this weekend for the sap to run. However, looking ahead, the forecast shows some potentially good sap weather coming next week. Our sugarhouse will remain closed until we have some fresh maple syrup to sell.

As an interesting aside, here is a picture of some of the animal damage that we've been finding in the woods this winter: 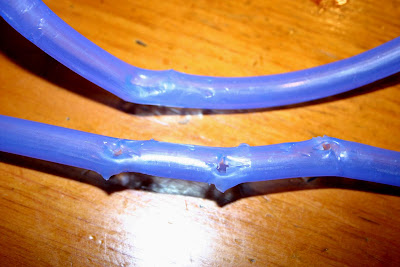 The bites are larger and more aggressive than the usual chewing that we see by squirrels. Not sure what type of animal has a newly acquired taste for plastic, but we suspect the damage occurred some time in the fall. Always a new challenge to keep us busy!
Posted by Carley McCutcheon at 9:04 AM 0 comments

Off To A Quick Start

If you've got an ear for maple news, you may have seen or heard some of the recent stories that were popping up on the radio and television over the past few days. With the noticeably mild weather and the taste of pancakes fresh on their tongues after Shrove Tuesday, people are thinking about syrup time! Many news stories featured local sugarmakers being rushed off their feet trying to get ready for a season that seems to be squarely upon us.

We are happy to report that the gorgeous weekend weather combined with lots of helping hands from family allowed us to now have the majority of our trees tapped! We've been working hard checking over and repairing our 30 km tubing system, and it is tight and ready for the flow to begin. The sap ran lightly on Wednesday, and when we measured the sugar content of the sap, it was quite high at 2.6%. Looking at our charts from previous years, that level of sweetness doesn't usually occur until close to mid-season, anywhere from Mar 15 to 30! We hope to collect more sap on Thursday, and then have enough to "sweeten the pans" - an old-time syrup makers expression for the first boil of the season. It won't be long before we have fresh syrup for sale - we'll let you know as soon as it's ready!
Posted by Carley McCutcheon at 4:17 PM 0 comments

The beginning of February marked the official halfway point of winter, though you sure wouldn't know it around these parts. With regular swings in temperature bringing us up over the freezing mark, and rain and fog being weekly occurrences, it's been feeling like spring sprung early this year, and winter never really arrived at all. Consequently, we have been hearing lots of questions from concerned maple fans who are worried about the unusual winter and it's potential impact on the syrup season.

Typically, winter is a time of hibernation for the maple trees. Sugar makers usually begin harvesting sap as winter wanes (usually around the beginning of March) when freezing nights give way to warmer days, creating ideal conditions for sap flow. This year, we have been experiencing these freezing and thawing trends steadily throughout January and February without much in the way of a consistent freeze. As usual, when it comes to attempting to predict Mother Nature, the impacts of this winter on the syrup season at this point are unknown. It would seem that all signs are pointing to an early season, but it all depends on the weather. And even the weather forecasters admit they're only right 50% of the time.

And so, heeding Wiarton Willie's prediction, we have started our preparations for the 2012 season. We began tapping on Valentines Day, Tuesday, February 14th. The sap was running some that day, and even more the following day, but it was "no flood", according to my Dad. He also collected a pail full of the sap to test, and the sugar content was good -- higher than it sometimes is in the beginning of the season. And hopefully, he says, it will get even better as the season progresses. The lack of snow makes it easy to get around in the woods, we don't need snowshoes this year. But it does mean that the animals have remained active and have damaged our tubing more than usual, so we've got lots of work to do!

Unfortunately, we are sold out of last year's syrup and the sugarhouse will be closed while we continue to tap the trees and prepare for the upcoming season. Please continue to check the blog for more updates; the countdown to that delicious first run syrup has begun!
Posted by Carley McCutcheon at 9:11 PM 1 comments