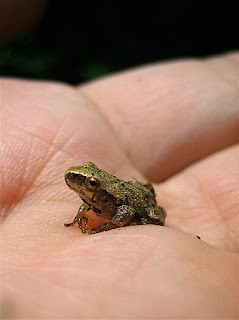 Unfortunately, as we feared, the warm weather did indeed produce a short season and the earliest end to boiling in our 40 years of sugaring.  Our final boil for the 2012 season was at midnight on Saturday, March 17th.  The spring peepers are singing loudly tonight, a sure sign that the season is over. It's an almost perfectly reliable (and fascinating!) piece of folklore -- when we hear the small chorus frogs' call begin to ring in the night air, the following day the sap run is finished.

Many hopeful maple followers have asked the question, "but what if the weather gets cold again now?".  There is a chance that more seasonable temperatures will return by the end of the week, but the warm nights have caused the maple buds to swell and give the sap a 'buddy' flavour, which is sharp and unpleasant.  The only silver lining to the season's end is that Dad will finally get a full night's sleep - the first one in a week.  With the lack of overnight frost, the sap ran slowly but steadily for days on end.

We were out in the sugarbush today, beginning the task of washing the saplines.  It feels like we just finished putting them out!  Our sugarhouse will be open most afternoons this week but please call ahead to check - (705) 835-5780.
Posted by Carley McCutcheon at 9:39 PM